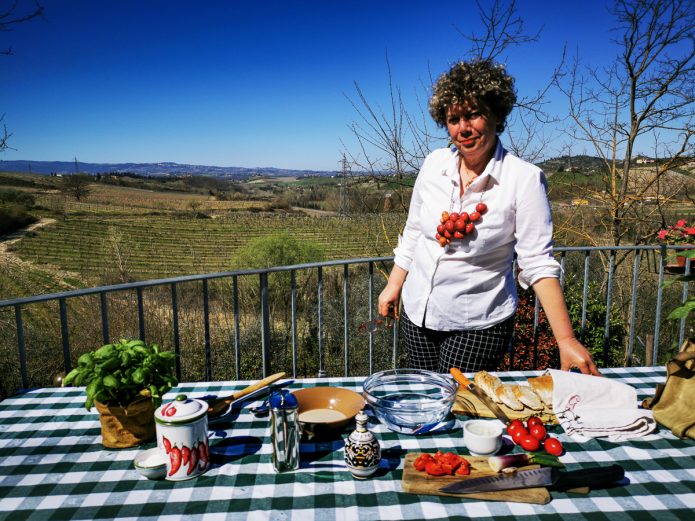 1 Cucumber of your favorite kind

A handful of basil leaves The secret to get a good Panzanella lies in knowing how to soak the bread having good olive oil extravirgin and exellent vinegar.

but if you follow my instruction tothe letter you will all become master panzanella makers!

You need a large salad bowl and a basin to soak the bread in.

On the table in front of you, from left to right (if you are right-handed, otherwise do it the opposite) put: the old bread cut in slices one finger high; the basin full of cold water, and the empty salad bowl.

Soak the slices one at a time for 2 minutes, then use your hands to squeeze all the water out.

Then break the bread up into big chunks in the salad bowl.

The bread must be wet, but also soft and spongy; if you keep it in the water too long, you will end up with a pulp which will not blend well with the fresh vegetables.

Now you have done most of the job! Cut the tomatoes into thumb-sized pieces, slice the onion into thin rings, break the basil with your fingers, peel and cut the cucumber into thin round slices.

Now you just need to add the seasoning – oil, salt and vinegar.

Mix softly using your hands, so as not to spoil the texture.

Let it cool off in the fridge for at least half an hour before serving.

Farmers used to use this dish during the harvest season to refresh themselves, and it was often brought directly to the fields by their wives, so as not to waste time going back home for lunch.

A poor dish, often accompanied by wine mixed with water, was able to slake thirst without weighing on the stomach or head. The dish is very old: Giovanni Boccaccio, who came from our same town, used to call it “Pan lavato”, “washed bread”. Tomatoes were added after the discovery of the new world. The name seems to be a combination of pane, “bread”, and alzanella, an old word for large earthenware salad bowls.